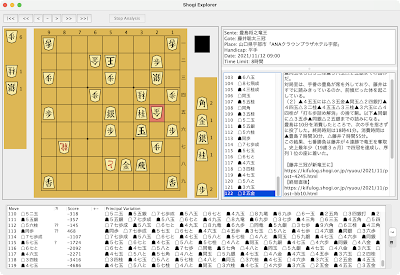 It is available for Windows, macOS, and Linux.

The game records must be in UTF-8 KIF format such as those that can be downloaded from popular online Shogi website http://www.81dojo.com/. They can be loaded from a file on disk or imported directly from the system clipboard.

Any USI compliant game engine may be used such as YaneuraOU or Gikou. Engines can be added and configured using the Engine Manager. 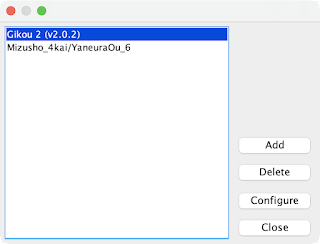 Using the Game Analyser you can choose which engine to use, how many seconds to spend analysing each move and, if using a KIF loaded from the filesystem, save the analysis to a file (extension ".kaf") which will be automatically loaded next time the game record is loaded.

The analysis will show the score evaluated by the engine for each position and identify weak moves (?) and blunders (??). The engine's preferred line - the Principle Variation - is shown and can be displayed on the board by selecting a line in the analysis pane and using the RIGHT and LEFT arrow keys.

The score is also plotted as an XY chart in the graph tab.

Shogi Explorer V1 is free to use and can be downloaded here. All versions require a Java 17 runtime to be installed prior to use.

For Windows and macOS I recommend installing OpenJDK 17 from https://adoptium.net/. When installing on Windows please select the option to install the JavaSoft registry keys.

On Linux just install whatever version 17 JRE or JDK is supplied by the distribution's repository. Linux users can start Shogi Explorer from the command line: java -jar ShogiExplorer.jar.